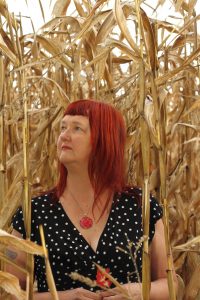 McRae first achieved commercial success as a member of Spirit Of The West, Canada’s legendary folk and Celtic band.  Since embarking on a solo career in the late 90’s, McRae has released six critically-acclaimed albums of original works imbued with Americana and Bluegrass, Blues, Folk and Gospel influences.

After performing at Folsom Prison for the first time in 2011, McRae and her husband and manager, the poet James Whitmire, himself a recovering addict, teach their Express Yourself creative writing and songwriting workshops in detox centers, alternative schools and correctional facilities across North America. Inspired by her teaching experiences, McRae wrote “Be Your Own Light” as an anthem of hope and redemption. The song was awarded First Place in the 2017 Family Folk Choral Songwriting Competition.