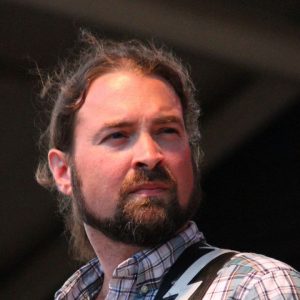 Through his soulful interpretation of covers and his original works, he built a large and loyal local following that gave him the courage to relocate to Nashville and explore the music scene. Singing, playing and writing in Nashville’s honkey-tonks, Andy refined his skills and gained wisdom through valuable life lessons.

In 2007 Andy returned to his hometown and released his first full length original album, “Crows and Buzzards”. The album was well received and the appeal for Andy to play his original music quickly outweighed the requests for cover material. “Crows and Buzzards” sold online across the US and overseas, and as his audience grew so did the demand for tour dates. Shortly after the release Andy hit the road and made his way along the east coast and throughout the south.

In 2009, Andy and fellow musician Dustin Bogue recorded an album of ten songs and formed the band Brasher/Bogue. Started as a duet, Brasher/Bogue grew into a five piece band that began their touring career on Kenny Chesney’s 2011 “Goin Coastal” tour. By 2012, Brasher/Bogue had produced three albums, played large festivals and venues all over the U.S., and supported many top name national acts.

In 2015, Andy once again focused on a solo career and created a new incarnation of the Andy Brasher Band.  Andy has headlined shows all over the US and even internationally, and Brasher has been included on the marquee with acts  including, Kid Rock, Kenny Chesney, Hank Williams Jr., Charlie Daniels Band -among others.

Recording at Blackbird Studios in Nashville, Tn., Hogarth and Smith have teamed to deliver a much anticipated solo debut by Brasher. Blackbird Studios is world renowned and trusted by artists such as Tim McGraw, Kid Rock, Kenny Chesney, Bob Seger, Neil Young, Keith Urban, Lynyrd Skynyrd and more to capture their amazing albums. Throw in an A list selection of musicians, including Kenny Aranof on drums, and Brasher’s strong songs and you have a masterpiece waiting for release in 2019.

Andy’s songs have been featured in film and media productions and can also be heard on terrestrial, satellite and internet radio stations all across the US.  Brasher is a frequent guest on songwriter panels for major U.S. songwriter’s festivals.