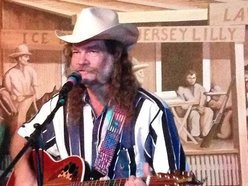 Looking like he just stepped out of the Old West with a trademark mustache and a twinkle in his eye, David Patrick Dunn personifies Texas. With a gift for e storytelling, beautiful melodies, haunting lyrics and a dash of lyrical humor, he has a unique style all his own.

With his debut CD, Slow Down and Listen, David made his his mark on Texas Music.

He loves to perform, and in addition to touring he has incorporated his love for music by creating/hosting Jollyville City Limits at BB Rovers Cafe and Pub in North Austin, where he is also one of the proprietors. His efforts to help promote songwriters has generated love and respect in the Austin music community.

David is a native of Kingsville, Texas, a place that the prickly pear, the rattlesnake, and the famed King Ranch also call home. His songs come from an attitude and an upbringing as indigenous as the mesquite tree, with turns of phrase twisting in as many unpredictable angles as a mesquite branch.

Musically, there are hints of folk, country, bluegrass, and Texas swing.

His heroes are the troubadours of the era: guys like Townes Van Zandt, Guy Clark, John Prine, Waylon Jennings, Merle Haggard and of course Willie (Nelson) and Lyle (Lovett.) Perhaps some of these have influenced his writing style, but not nearly as much as has life itself.

Listeners can walk the fence-row along the poles of fact and fantasy tied together by strands of lyrical realism, supported by the tension that comes from stretches of the imagination locked between staples of world-wide experience. Look out for a few barbs of humor!