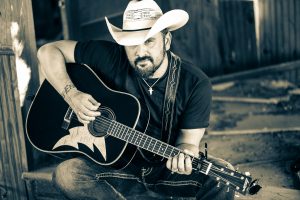 “I worked my ass off on Music Row.

Tryin’ to get on the radio

And I had to tell ‘em all where to go

When they tried to make me a pop star

I got me a honky tonk heart”

Those words say it all.

With a distinctive southern voice as traditional as the signature black cowboy hat he wears, Ray Scott garnered attention from “The Row” in the days before modern condos took over historic houses. Warner Brothers released his debut album, My Kind of Music, to critical acclaim and a top 40 single in 2005. But typical music business politics combined with a deafening change in the country radio market did not work in Ray’s favor. Or did it?

What followed from the label split two years later was the birth of the digital format and a “Rayincarnation” of sorts. Never one to quit on his calling, his own self-awareness fully emerged, and a new busload of fans joined him for the ride.  For those seeking more than girls, beer cans and moonlight by the lake, Ray’s heartfelt vocals and down to earth lyrics resonated. Independent releases Crazy Like Me (2008) and Rayality (2011) not only gave him a physical product on the road but garnered a high number of digital sales and support from Sirius XM. “Drinkin Beer” and “Ain’t Always Thirsty” received SiriusXM airplay. And so did one of his most well-known singles, “Those Jeans” from the Rayality album, produced by Dave Brainard (Jerrod Neimann, Brandy Clark).

Then came his 5th studio album in 2017—Guitar for Sale, produced by Michael Hughes.

“I appreciate that he’s the most stubbornly genuine artist that I know – a guy who refuses to compromise or follow any other inspiration other than his own feelings and experiences. He doesn’t give a damn about what anybody else is doing, he just wants to find and execute his vision, “says Michael.

So then, it’s no surprise that the two friends paired up again for Honky Tonk Heart, the new EP out March 1. With catchy electric and steel guitar licks from the get-go, you’re in for a boot steppin’, whiskey drinkin’, feel good time. But don’t mistake the two smoky bar tunes (Honky Tonk Heart, Trainwreck) for fluff pieces because Ray is anything but. If he sings it, it’s because he’s been thru it, he believes it, or he currently lives it (or sometimes all three). His rip roarin’ honesty is just as strong in the ballads as it is in the uptempos. Ray’s vulnerability resonates with the most heartbroken, yet hopeful of souls in “It Is What It Is” and “Leave this Town.” The EP comes full circle, ending on a sweet love note with “Thank You Baby.”

“’Honky Tonk Heart’—the song—is my life, and it’s an ode to all the troubadours like me runnin’ up and down the highways doin’ what we do for the love of real country music, ‘cause it’s what we bleed. My new Honky Tonk Heart EP is the first glimpse into a new era of creativity that kicked in just after the release of Guitar For Sale. I’ve been crankin’ out one new song after the other in the last couple of years. I can’t wait to lay ‘em on ya. There’s a lot more to come. To quote one of the new titles, I ain’t ‘Nowhere Near Done’. . . . see ya’ll out there soon!” —Ray