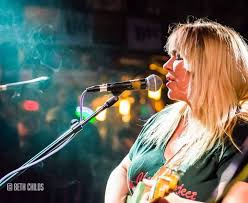 Throughout her career, Brigitte London has been called a renegade, gypsy, outlaw, highwaywoman. Her songwriting and powerhouse vocals have attracted an A -list lineup of backing musicians live and on record that have included legends.

Brigitte worked on recording projects with the likes of the late great Jerry Reed & Porter Wagoner, Marty Stuart, Bobby Keys of the Rolling Stones, Dale Watson and many more. She’s released ten albums and traveled the world with her songs. But despite urgings from Industry heavyweights, Brigitte London has remained independent, determined to stay in creative control of her music. A poet at heart, words, music and love are her life’s passion.

Brigitte was recently featured on the Discovery Channel’s Killing Fields Season Two premiere performing her song, “She’s In The Bayou.” She is currently working on her eleventh album, a collection of Billy Joe Shaver and Kris Kristofferson songs. An advocate for independent music, Brigitte is a founding member and producer of the Last Honky Tonk Music Series, producer and host of The Highwaywoman Radio Show (2008-current), Honky Tonk Hometown Radio Show (2016-current) and a new show, Last Honky Tonk Music Series Radio Show. She also produces multiple festivals and live music events and is co-founder and editor of Outlaw Magazine. Brigitte is also the founder and director of Songs on the Bayou Songwriters Festival in Morgan City, Louisiana.