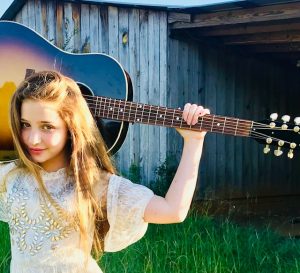 Sadie McClendon has been entertaining listeners young and old since she was eight years old. Originally from Tuscaloosa, Alabama, Sadie made her Nashville debut on the stage of Honky Tonk Central.  That same day, she was invited to perform on the main stage of Tootsies, which she did, for several hours!  She most recently appeared on stage with Jamey Johnson in Alabama for a crowd of more than 10,000!

Skilled beyond her years on guitar, mandolin, and ukulele, now newly eleven year-old Sadie is composing original material, and is inspiring audiences with her love of traditional and outlaw country music infused with her own unique vocal style.

Sadie is also the youngest member of The Last Honky Tonk Music Series.