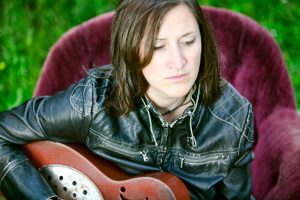 Kelcy Mae’s southern poeticism, commanding vocal performances, and genre-traversing albums have landed her comparisons to a varied group of famous songstresses including Natalie Merchant, Regina Spektor, Bonnie Raitt, and Shelby Lynne. Whether digging into her Louisiana roots and tapping her boots to an original honky-tonk tune or emoting alongside wailing electric guitars in a consuming 90s-esque, alt-rock trance, Kelcy Mae undoubtedly sings from the heart, which–to the benefit of audiences–is often right on her sleeve.

The New Orleans-based songwriter has penned three full albums, Half-Light (2014), Pennies in Hand (2011), and The Times Compiled (2007). On December 1, 2015, Kelcy released a holiday single, “Christmas With You (Merry Me),” with an accompanying music video crowd-sourced from home photos and videos of LGBT couples and allies as a celebration of this year’s Supreme Court decision legalizing same-sex marriage.

She has earned a number of accolades among media in and around New Orleans, and in 2013, she was named a Pepsi “Southern Original” finalist in the first-ever national contest. In 2014, she was featured as an Emerging Artist at the SummerFest music festival in Milwaukee, WI.

Kelcy Mae was born on St. Patrick’s Day in Shreveport, LA. She currently lives and performs in New Orleans where she earned an MFA in Creative Writing from the University of New Orleans. For more news and updates, join Kelcy Mae’s email list.