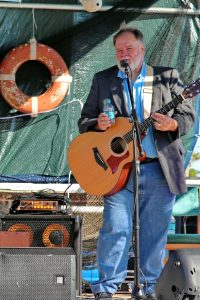 R T Hall is a singer/songwriter on the move. Influences from folk, country, rock to classical have led him to raise “emotion in song” to audiences across the country. Venues include festivals such as the Tucson Folk Festival, the Mississippi Songwriters’ Festival, Songs on the Bayou, and others. His
music reflects life as it is and how it can be. He finds it easy to move, living in a motor-home. In addition to music, he is a “professional” volunteer. Winters are spent near the gulf coast of Mississippi and the warmer months in cooler locations. He has visited all 49 of the states that he can drive to in his rolling castle and entertained audiences in most of them. Many of the places are reflected in a his songs. His new single, “Missing Mississippi Tonight”  can be found on theRTHallMusic.com website.