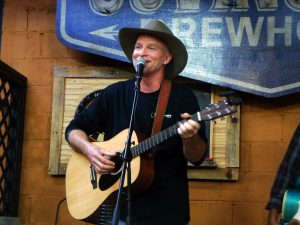 Ponchatoula, Louisiana, based singer-songwriter Tommy Ike Hailey has been called “a storyteller in song” by some listeners. Influenced early on by Jim Croce and James Taylor, and later by Texas musicians Jerry Jeff Walker, Nanci Griffith, and Robert Earl Keen, he sings of love and loss, of joy and sorrow, of family, friends, and the folks you see on the street , all with the voice of experience, observation, and compassion.

When he’s not out somewhere singing his own songs, he shows his love of songwriting and singer-songwriters in other ways. For example, he created and hosts Troubadours Songwriter Night in Covington, Louisiana, and he co-created and co-hosts Songwriter Sessions in Des Allemands, Louisiana, both of which showcase featured local and regional songwriters and include a songwriters open mic at the conclusion of each show. He is a stage host for the Third Street Songwriters Festival in Baton Rouge, and has been a stage host and a behind-the scenes troubleshooter for the Songs on the Bayou Songwriters Festival in Morgan City. In addition, he helped to create and serves on the Board of Directors of the Ozone Music Education Foundation, whose mission is to provide resources and music education opportunities to children and adults. As a part of their public outreach, the Board members of OMEF organized the first annual Ozone Songwriter Festival, which was held Oct 20 and 21, 2018, in Mandeville Louisiana, which featured over 100 local, regional, and national songwriters.

For Tommy Ike, it’s all about the songs, and most importantly, it’s about hearing them from the ones who know them best – the songwriters who wrote them.