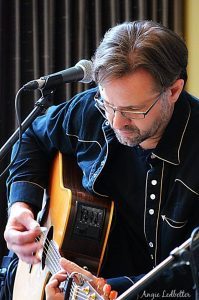 Originally from Lafayette, Louisiana, Barry began writing songs shortly after joining his first band in the early 1980s. The Basin Brothers Band developed a strong regional following and included several of his original songs into their set list. The band, which began as a country band, shifted their musical focus to their Cajun heritage, and they began performing traditional Cajun music. The band began to tour extensively playing festivals, colleges, and clubs across the U.S. and Canada, along with performing at major venues with nationally recognized acts. The band signed with Flying Fish Records and released an album of traditional and original Cajun music that was nominated for a Grammy award in the “Best Traditional Folk Recording” category.

Following a move to Baton Rouge, Louisiana, Barry began playing in several local bands and soon met other musicians who shared his interest in songwriting, and he began to focus more on developing new original material. He released his first solo album in 2011 titled Worn Wooden Floors, which includes ten of his original compositions. Barry continues to write and perform locally and in Texas, where his music has been well received. In addition to performing, Barry has become a strong advocate for songwriters and original music in South Louisiana. He started a Regional Chapter of the Nashville Songwriters Association International, co-hosts an annual songwriter retreat, and coordinates a weekly songwriter showcase featuring established and up-and-coming songwriters.