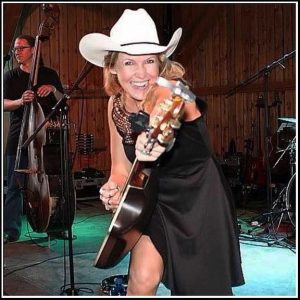 Kim Carson was born in Ardmore, Oklahoma, and raised in Canyon, Texas. She began to play the piano at age 7 and the oboe at age 12. Even at a very young age, Kim loved country music. She realized, however, that Buck Owens did not use an oboe in any of his songs. So Kim decided to learn to play the guitar.

Kim sometimes plays bass, depending on the tour lineup. When playing solo, Kim plays harmonica, and tambourine with her foot. She performs both original and Classic Country songs. In fact, Kim has received the award of “Best Country Artist” eight times by OffBeat Magazine. Her album Live at Tipitina’s was voted “Best Country Album” of 2004. She has performed 20 times at the prestigious Jazz & Heritage Festival in New Orleans. Kim has distinguished herself as a formidable Country & Honky Tonk songwriter and is the undisputed “Honky Tonk Queen of New Orleans.”

Kim Carson has regularly toured Europe since 2000. Over the years she has built up a very loyal fan base in Switzerland, Germany, and Austria, among other places in Europe. Through her musical prowess, staggering stage presence, and jovial disposition, she is able to connect well with fans and promoters alike. She has a strong stage presence – always smiling and showing passion for what she does. In addition to her summer tours through Europe, Kim also regularly tours through the Gulf South, and through Costa Rica. When she is not on tour, Kim lives and performs in New Orleans, a town whose rich musical tradition can also be seen in her playing. In fact, her diverse set of influences has attracted fans to her who do not normally belong to the “Country Music Circle.” Kim plays with many talented musicians, and she always gives them opportunities to perform their own music. This keeps Kim Carson’s shows fresh and dynamic!

Kim has released 11 albums to date including her latest, a live solo recording of original songs, Live at Waylon Rümli.
Kim’s music is available online from iTunes, cdBaby.com and other sources.