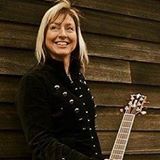 Singer/ Songwriter Kay Miracle began her musical journey at the age of 12 thanks to her grandfather and mentor Claude Wood, an upright bass player who played in various Northwest bands and backed such artists as Hank Williams and Doris Day. He bought Kay a bass and acoustic guitar on which she learned to play her first song “Your Cheatin’ Heart.”

As a teen, Kay and her little sister Kim traveled the West Coast performing at state fairs, talent contests, and local TV shows as the Miracle Sisters. During a Miss Washington pageant, Kay won the Best Talent award for an original composition, which landed her a college music scholarship. After college, Kay began touring the globe with the PACAF and USO military shows, developing her early influences into a unique sound and new direction. While in Japan, she joined a Syracuse based band and eventually made her home in New York. Armed with her musical roots, experience, and love of performing, Kay captured the attention of like-minded musicians and became the lead singer, rhythm guitarist, and songwriter for the alternative country band Reckless Drivin’. The band took home a total of five SAMMY’s (awards honoring Syracuse’s best local artists) in which two were personally won by Kay as “Best Country Vocalist.”

Reckless Drivin’ released two CDs, opened for national acts, and was nominated to represent the local music scene at the NXNE Music Festival in Toronto. After a long successful run, Kay decided to follow her dream, and in 2013 the all original American Roots band Kay & The Miracle Cure was born.

In 2013, Kay was signed to Cayuga Records and released her first CD under the name Kay & the Kavemen, which featured Dave Curtis on bass and Mike Sims on guitar. She showcased songs off the CD in 2014 at the TeXcromosome showcase in Austin, Texas. Kay also volunteers with disabled students in an after school music program and wrote songs for the Cancer Relay for Life Ceremonies for the American Cancer Society as a tribute to her mother, who is a cancer survivor.

In 2015 Kay joined Brigitte London of Highway Woman Radio on the “Last Honky Tonk Train to Clarksville,” a songwriting tour with 15 independent songwriters in which Kay performed solo at venues from Texas to Clarksville, Ohio. Continuing her service to the military, Kay flew to the Island of Hilo to perform at Veteran hospitals, and in 2015 organized fundraising concerts for the Wounded Warriors and Patriot Guard of Syracuse, NY.

Kay’s original song “The Year We Slept Thru Christmas” was selected by Women of Substance Radio and was aired nationally in a worldwide broadcast. Kay was also invited to perform in the TeXchromosome Women with Texas Spirit showcase during the 2016 SXSW music festival in Austin Texas, as well as being selected to play the Native American Stage of Nations at the Blue Rain Ecofest.

Kay continues to live the dream with guitar in hand, and is preparing for her next musical adventure as a soloist or with her band Kay & the Miracle Cure.