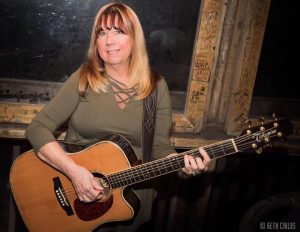 A native of St. Louis, Missouri, Donna Slater embodies the same musical and cultural uniqueness as the riverfront city she once called home. Donna found the Gulf Coast while vacationing in Pensacola, Florida, during the early 1980’s. It was during this trip that her original music was discovered by Joe Gilchrist, owner of the world famous Flora-Bama Lounge. She soon found herself on the roster of regularly performing musicians at the Bama, and she decided to make the Alabama coastline her new home.

“I write songs to both heal and open myself to others in ways that I usually cannot express in one on one conversations. I have drawn strength from so many talented musicians, and I hope that listeners can do the same through my songs.”