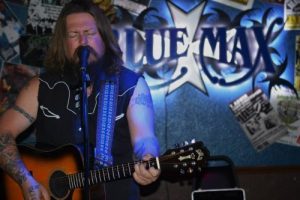 Casper McWade and his HonkyTonk Rebels are no strangers to country music. Although from different diverse backgrounds, this quartet has always shared one common thread: the love of true homegrown country. These boys don’t follow suit with the “Nashville” standard nor do they claim to be part of the “Red Dirt” scene. These boys simply put it out there the way it was meant to be done.

As a child, Casper was introduced to real country and Gospel music. His mother sang in a gospel group and his grandmother was a songwriter. It was Bob Wills and Waylon Jennings who influenced him the most, however. Drummer Grant McCray grew up between Nashville and Oklahoma. His father is a Singer/Songwriter still today. Fiddler/Utility man David Short “Shorty” has been on stage with such country greats as Willie Nelson, The Oak Ridge Boys and many, many more. He toured with David Allan Coe as his fiddler for awhile as well. Bassist Josh “Skeeter” Johnson hails from Pearl, Mississippi. He moved to Oklahoma in 2009, where he quickly found his place among the Rebels. 2012 marked their first TEXAS radio release “Long Way From Home” that has been very well received thus far. The band has been deemed a”Dancehall Favorite” in many areas around Texas and Oklahoma.

With lyrical content that will have you ready to party your boots off, to a sad song sure to have you wiping your eyes, Casper and the boys continue to win over audiences around the globe.